To boldly print, where no man has printed before!

3D printing is a rapidly growing area of technology, first used by large corporations, then hobbyists, and now more and more, by everyday people. But never before has a 3D printer been used in space. Until now.

A specialised 3D printer built by ‘Made In Space’ has cleared the final hurdle before it gets sent into space. Passing strict Nasa durability tests with flying colors, the machine then flew to the International Space Station (ISS) on a SpaceX flight in August this year. In the last few days astronauts have been working to set up and this print and begin to get in into working condition.

Everything appears to have good according to plan, and now we can see for the first time ever, an object 3D printed in space. NASA explains:

"This first print is the initial step toward providing an on-demand machine shop capability away from Earth,[...] The space station is the only laboratory where we can fully test this technology in space.” 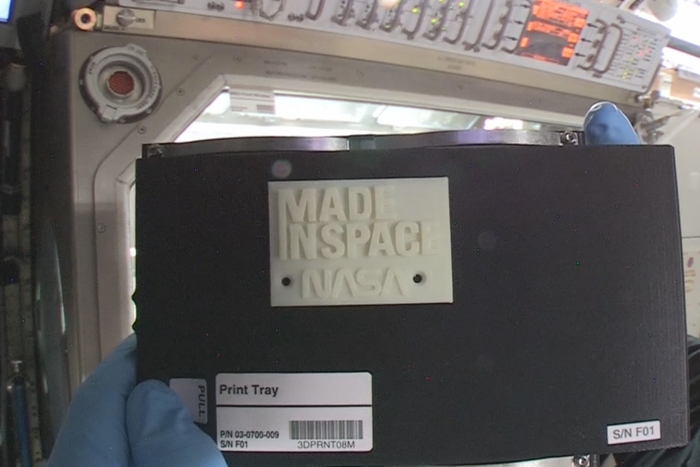 The first objects being printed by the machine are mainly being used for calibrational purposes, as scientists attempt to learn more about how 3D printing works in microgravity.

“This is the first time we’ve ever used a 3-D printer in space, and we are learning, even from these initial operations, [...] As we print more parts we’ll be able to learn whether some of the effects we are seeing are caused by microgravity or just part of the normal fine-tuning process for printing. When we get the parts back on Earth, we’ll be able to do a more detailed analysis to find out how they compare to parts printed on Earth.”

The hope is that should this be successful, the amount of spare parts which need to be taken to the space station via rockets at great cost could be reduced. Rather than take all the parts they need, astronauts could simply print parts on demand, saving precious cargo space for more important equipment such as experiments and computers.

Further into the future, 3D printing could be used to create self assembling spacecraft or other space stations which can repair themselves automatically. Such projects would not even require raw printing material, as they could potentially harvest all they need from asteroids or other celestial bodies.