Why You'll Be Talking To Alexa Soon Too

It's so easy to think of shipping giant Amazon as only an e-commerce site with great deals and quick service but in truth, the company offers so much more. From making the news with their drone delivery services to basically creating their own version of Black Friday, the teams at Amazon are clearly innovative and ready to come at things from a different angle. The Internet of Things is no longer a science fiction creation that may happen someday. The reality of a smart home that is connected via the Internet is a very real thing in the not too distant future. Here are a few reasons why Amazon will be the leader in developing the reality of smart homes.

1. They're not all about smartphones - Okay, so Amazon did have an attempt at a smartphone, but the Fire Phone was seen as a pretty big flop for the company. It was introduced in July of 2014 and within less than a year, the attempt was considered a failure. The phone didn't gain traction with smartphone users, prompting Amazon to take a $170 million charge on the value of the number of unsold units. Where's the silver lining here? Putting out another flagship model without distinctive features in an already saturated smartphone market might have been a mistake, but Amazon has focused on the creation of many other products since then and the lessons they have learned make these new categories competitive and full of innovation.

The Echo is one of the most popular smart home devices on Amazon, regularly going out of stock due to high demand. Image: Amazon

2. They sell out of smart home products - According to Scot Wingo, chairman of an e-commerce consulting firm, the Echo could be Amazon's next billion-dollar business. “It’s one of the most sold-out things that I see on Amazon,” he says. The Echo sells for just $180 on Amazon and has even been seen on some other e-commerce sites, like eBay, listed at a higher price since the demand often leads to Amazon being out of stock. Amazon is leading the pack when it comes to smart home assistants and the popularity of the product only fuels the fire to continue development in this arena while other industry leaders are focusing on the gadgets you're wearing while you're out and about. Amazon is taking another path and it looks like it's paying off.

3. Alexa is the real deal when it comes to voice assistants - The competition between Siri, Cortana and Google Now is fierce but easily decided amongst some consumers. Everyone has their personal preference when it comes to the smart assistants we carry around with us daily but, Siri can be left behind if you leave your phone in the car or elsewhere. Alexa, on the other hand, seems much more omnipresent within a household. Alexa executes a variety of tasks from playing music around the house to managing your growing shopping list or calling an Uber if you need to go somewhere. The other smart assistants are capable of this too, but the difference is that Alexa is being made a staple inside homes. We think of our smartphones as devices that enable us to do things on the go, but what's more convenient than having help when we're at home? Amazon has skirted around the other big players by positioning their smart assistant in a pervasive, almost ubiquitous zone and now they're dominating that market.

4. It's not Apple, Google, or Microsoft - Having said that Amazon is challenging other industry leaders, the fact that Amazon is not one of the major smartphone developers is a plus. Amazon has long been able to provide consumers with lower priced devices, like tablets, that compete fairly well with the more expensive options. Brand loyalty amongst users of Apple and Microsoft devices is sometimes tough to beat, but Amazon is more universal because it offers products other than tech. Their audience is bigger than just devices and this regularly brings a more diverse buyers to their consumer base. It's not too hard to see how someone might go to Amazon for one thing and end up leaving with other products too. Amazon has a unique advantage to marketing smart home devices with its broader audience and space for self-promotion. 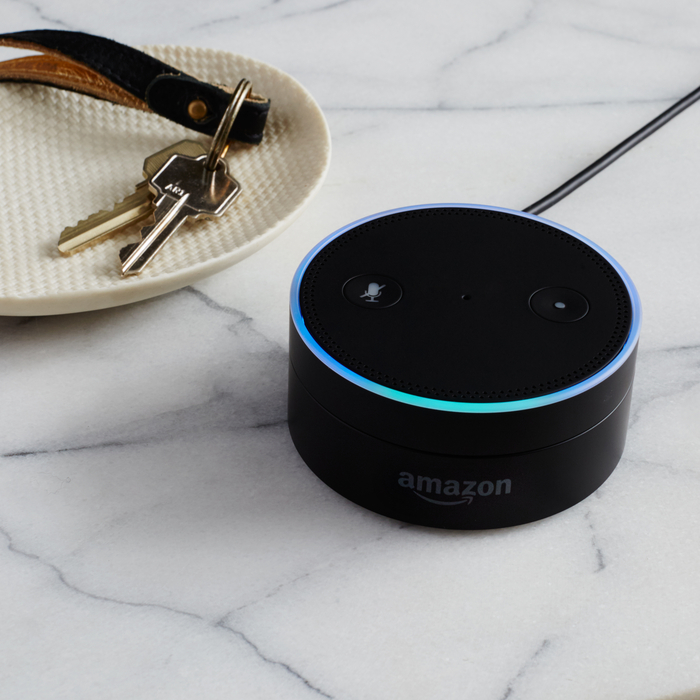 The Echo Dot is supposedly only available by using voice command and telling Alexa to place your order on Amazon. Image: Amazon

5. They keep making improvements - Considering that when Amazon Echo first came out it was looked upon as a kind of gimmicky toy, the view that people have of the device today has drastically improved. Addicted to Alexa and anticipating new Amazon products, consumers can't wait to get their hands on the latest products the company has to offer. Earlier this month the Amazon Tap and Amazon Echo Dot were launched and customers are clamoring to get their hands on the latest editions. It's also more tempting to become a Prime subscriber since these lucky customers are the only ones who have access to ordering the Echo Dot by telling voice assistant Alexa to order it for them. It appears there are ways around this but it was probably set in place so that Prime subscribers get another benefit and to avoid an immediate sell out of the new device.

Amazon has a lot going on and so much to offer. They've taken the smart home challenge seriously and while other companies are focusing on phones and wearables, they're moving in on uncharted territory and establishing themselves as the industry leader with high quality products and innovation. Don't be surprised if Alexa is handling things at home for you soon too.