Apple should be very afraid...

Google has proven once again that it deserves its status as a world renowned innovator. With its debut of Android 5.0 and Android Wear, the company is making a bold statement on how the future of design and device integration should look. Both operating systems showcase multiple technologies which are both innovative and also a direct challenge to iOS’s ‘closed garden’ concept.

The latest version of the Google mobile operating system is immediately noticeable by its visual redesign. The new design language, which the company is calling ‘Material’, seeks to create a unified look across all Android platforms, and even third-party apps. The look itself is a departure from the ultra-flat visuals of previous versions of Android, and the iOS7 redesign. Utilizing visually present layers, drop shadows and isometric 3D, the new look is all about the illusion of depth.

In addition, across all platforms for the OS, Google is using similar visual elements. The most common of these is the ‘card’: a white rectangle displaying information condensed into an easily readable and accessible format. These can take the form of a text message, weather update, map location and much much more. 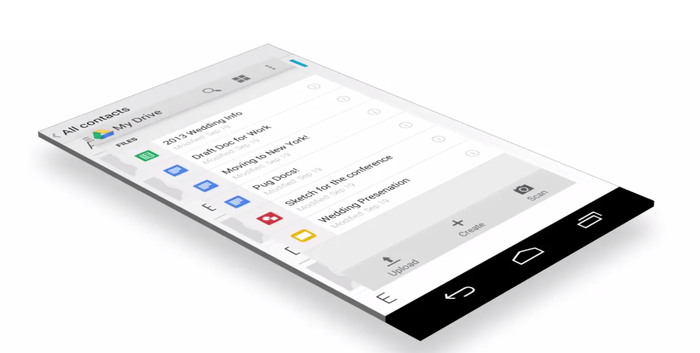 While Apple is busy trying to turn the Lightning connector into a proprietary media port, Google is doing the opposite. It is taking the Micro USB data port which is common on all Android phones, and creating the capacity for it to send audio data. This would theoretically allow for more advanced controls on 3rd party audio devices, beyond what is currently available with the standard headphone jack.

Biometrics like those used in the iPhone are a great way to lock down your device, however Google is pioneering an even more convenient way of dealing with the problem of security. The lock screen and GPS on your phone in Android 5.0 will communicate with each other, allowing the lock screen to know where a user is at any given time. Users can use this tech to then select places where their phone doesn’t need to be locked, freeing them up from difficult passwords. Alternatively, should they have an Android Wear smartwatch, they could set their phone so it only locks when it is separated from the watch.

The latest version of Android will also feature support for a wider variety of silicon chip architectures. Among the most notable of these is the support for so-called 64-bit chips, breaking Apple’s de facto monopoly on this kind of chip in mobile devices. In addition, support has also been added for ARM and x86 architectures.

One of the largest problems with smartphones in energy use and its inevitable impact on device battery life. With Android 5.0 Google is changing the building blocks it uses to create applications, from its prior ‘Dalvik’ environment, to a new in-house runtime for ART. Google believes that once this change is fully implemented, the energy consumption for Android devices could be halved, effectively doubling battery life.

While Apple has been trying to create a cross platform experience across its ‘iDevices’, this has previously been optimised solely for tablets and smartphones. With Android Wear, Google has taken the time to create a separate yet familiar design and interaction experience on a wearables platform. Small areas have been tweaked to make the interface much easier to use on a watch face (such as the previously mentioned ‘cards’), while overall visual cues remain the same. Obviously, any hypothetical iWatch running iOS would need considerable redesigning in order to compete with a more optimised OS like Android Wear.