Beats Music Takes To The Skies

Starting with live concerts in the planes!

Beats Music, an online music streaming website, announced today their partnership with Southwest Airlines. The service uses algorithms to personalize the music playlist to the user's preferences. The company first launched in 2012 under the name “Daisy” but in early 2014 was rebranded and quickly bought by Apple, which sold for $3 billion just this past week. Despite the fact that Apple plans to integrate Beats Music into the iTunes library in the next year, the latest affiliation with Southwest Airlines will hopefully gain a wider audience.

Although Southwest Airlines does not have individual seat-back entertainment screens, customers can stream live TV and on-demand video and music to their own personal devices with internet access. The Texan-based airlines began offering the free entertainment content in July 2013 in partnership with Dish Network. The option is available in about 80% of its carriers. Starting from today, November 3, Southwest customers will now receive free streaming from Beats as inflight entertainment onboard the planes that already offer free Wi-Fi, as well. 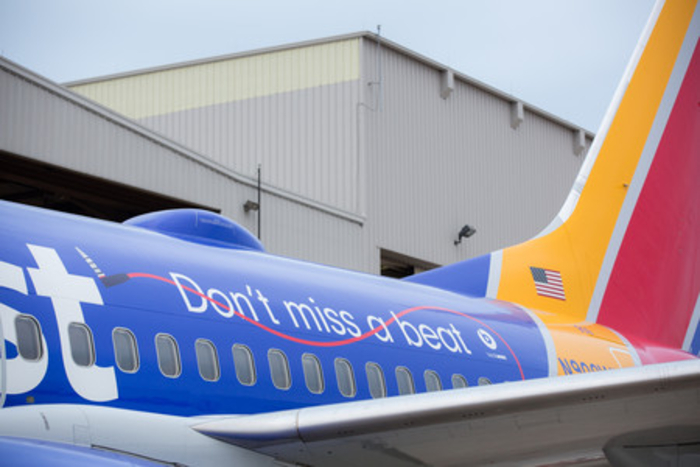 Provided that the customers enter their email address and bring their own smartphones, tablets and laptops, Beats will allow them access to the generated playlists and the innovative playlist The Sentence, which asks the user a series questions about their location, activity, and musical preferences and based on the user’s answers, it then constructs a stream of music assorted to the user’s taste for the duration of the flight. The device the customers bring must be compatible with the Beats app, which is available in both iOS and Android, but it can also operate as a web browser.

Celebrating the new collaboration, Southwest outfitted one of its Boeing 737s with a massive pair of Beats headphones over the cockpit, as well as the catchy label and logo. With Trent Reznor of Nine Inch Nails as the Chief Creative Officer,  Beats has been renown in the industry for its edge and fresh face. Southwest launched the Beats promotion by surprising passengers with a live-music performance. Cobra Starship will perform on a 2:30pm departure from Dallas Love Field to Chicago Midway, and Elephant Revival will perform on a flight from Portland to Denver.

5 reasons to get you excited for the Pill+