Find out everything you need to know about this exotic drink 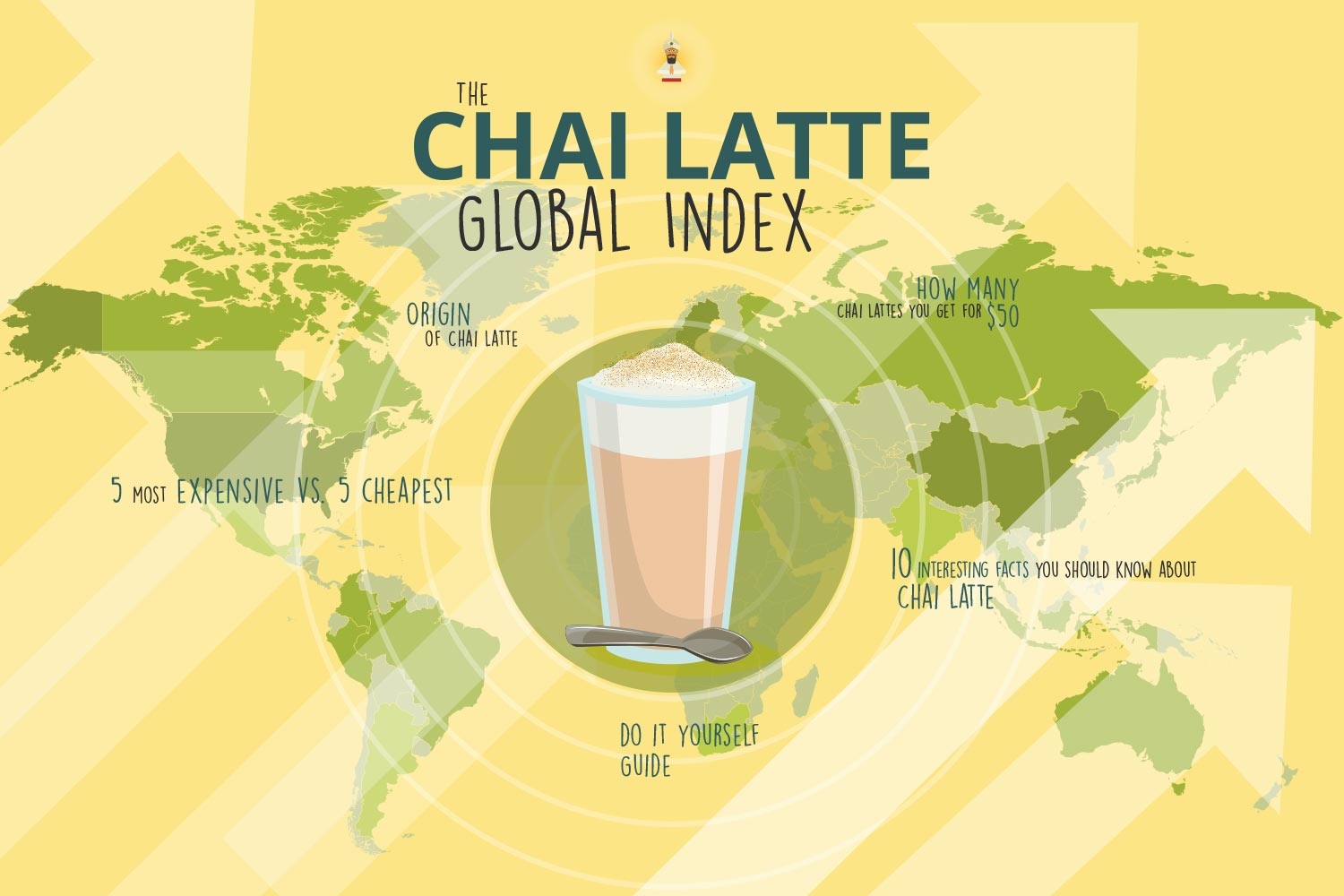 “Sweet meets spicy” is the new trend for drinks, since chai latte has become popular outside of its homeland, India. This delicious black tea, infused with warming exotic spices and combined with steamed milk, is not just a delightful hot drink, but can also show the economical differences in the world. For instance, Starbucks’ global pricing strategy is a good indicator of the purchasing power parity and the strength of country’s currencies. That means that converting the worldwide prices of a Starbucks product into USD and comparing them can show the economic differences between countries and the strength of their currencies. Therefore, we have researched the price of tall Starbucks Chai Latte in 30 very different countries in our effort to show the inequality in the world.
So what do you think: Who pays most for this delicious drink and where does your country rank in the Chai Latte Global Index?

After having a look at the Chai Latte Global Index, let’s dive into the history of chai latte, to the days when it didn’t yet enter the global market through the Starbucks launch in the 90’s. Chai latte has its origin in India and simply means tea with milk. Chai is a centuries old beverage in India and the type of tea used in chai latte is the masala chai, which is a blend of spices varying from region to region. It usually includes ginger, cinnamon, cloves, green cardamom and cardamom seeds. Masala chai was longtime considered a herbal medicine and was therefore not a daily beverage. When the British came to India they saw the positive effect of the masala chai on health and performance and started giving it to their workers, adding milk and sugar to increase its nutritional value. That is when the chai latte was created.
When Starbucks discovered the exotic drink, they created their own recipe and launched it worldwide to target non-coffee-drinkers. The delicious and exotic mixture became unstoppable and more chai latte versions were created, like the Iced Tea Chai Latte, Pumpkin Chai Latte or the Cinnamon Chai Latte.

Stars like the Kardashians and Oprah are increasing the popularity of chai latte by marketing the drink, either by naming it their favorite Starbucks drink or creating their own version of Chai Latte, like the “Oprah Cinnamon Chai Tea Latte”. Many people all over the world are posting pictures of their chai lattes on social media whenever they have one in a coffee shop. While the western world is seeing chai latte as a hip and cosmopolitan drink, chai latte in India is rather a drink for the working class, due to its healthy effect and nutritional value and the elite class in India drinks tea without milk and sugar.

Considering the amount of sugar and calories that you find in most chai latte products, both from coffee shops or from various beverage producers, it is impressive this drink gained such a huge popularity, especially since people are becoming more health-conscious and the trend of eating healthy is rising.
So, did you know how much sugar and calories a chai latte has?

The Action on Sugar campaign group did a research on drinks and the amount of sugar they contain and found out that commercial versions of chai latte usually have more than ten teaspoons per cup. Caffe Nero's Chai Latte has eight teaspoons of sugar, the venti Chai Latte at Starbucks has 13 teaspoons of sugar, and some of the versions at Costa can have up to 20. The medium (tall) chai latte of Starbucks, that we included in our index, contains about eight teaspoons, has 70mg of caffeine and 190 calories, while the biggest one, the venti, has 310 calories and 120mg of caffeine.

1) Start with adding 2 cups of water and 1/2 tsp of ground ginger, green cardamom and cardamom seeds, nutmeg and ground allspice each and bring everything to boil. Leave it to simmer for 5 minutes to get the full exotic taste. You can also use cloves or fenchel, leave a spice out and add more of another, just try it out and create your personal perfect chai latte.

2) Second step is to add 2 tea bags or 1 Tbsp of loose black tea leafs to the spices and bring the water to a slight boil. It is important to turn off the heat once it is boiling to avoid bitterness but leave everything to fully steep in water for 5-10 minutes - depending on how strong you like your tea - and remove the tea. Strain the tea so you don’t have pieces in your drink.

3) Last but not least, combine the milk with 1 tsp of cinnamon and cane sugar (or maple syrup) and bring the mixture to a slight boil, while stirring. Almond milk can be used for making vegan chai latte and is also delicious. To froth the milk you can use an immersion blender. Slowly pour the frothy milk into a 1/2 cup of tea and use 1/2 cup of milk. Sprinkle the top with a pinch of cinnamon. And there is your homemade chai latte.

The Chai Latte Infographic we have created showing the Chai Latte global Index and strength of the countries’ currencies upon the prices of Starbucks Chai Lattes in different parts of the world. In addition, we have researched the origin and history of this delicious drink and added everything you need to know about chai latte in ten interesting facts.