A bigger, more powerful version of the iPad, which the media has come to refer to as the iPad Pro or the iPad Air Plus.

After the iPad, there was the iPad Air, and then the iPad Air 2, and then the iPad Mini, of which the Mini 3 has Retina display. After having revealed their brand new MacBook line at their Spring Forward event, we’re now all left wondering if the rumors were true. We originally believed that Apple was developing a 12-inch Retina MacBook Air, alongside another device, which many claims seemed to give value to the idea that it would be a bigger, more powerful version of the iPad, which the media has come to refer to as the iPad Pro or the iPad Air Plus.

The fifth generation iPad was renamed the iPad Air, and since then, Apple has alluded that the company would adopt the naming convention of its laptop lines. Logically, therefore, after the iPad Air, we would expect an iPad Pro, especially now that there is a MacBook, which corresponds to the iPad.

The iPad Pro would be larger, more powerful, and aimed at the professional industry. Most likely, it would be released in the second half of the year, according to Bloomberg. Other sources seem to believe that the 12.9-inch tablet would only go into production starting in September, which means we wouldn’t see the tablet until next year.

Macotakara, on the other hand, seems to believe the tablet will be 12.2-inch LED, that will have a detachable keyboard, similar to Microsoft’s Surface Pro 3, and will in fact be released in 2015.

Still, other reports from Taiwan are suggesting the 12.9-inch tablet will arrive in 2015, and it will have a hybrid OS X and iOS-integrated operating system, which will house a more powerful version of the A8 chipset found in the iPhone 6.

China’s United Daily News wrote an article suggesting that Quanta Computer was working in partnership with Apple to manufacture the iPad Pro. DigiTimes backed this up, saying there will either be a 12.9-inch or 13.3-inch model available by the end of the year. 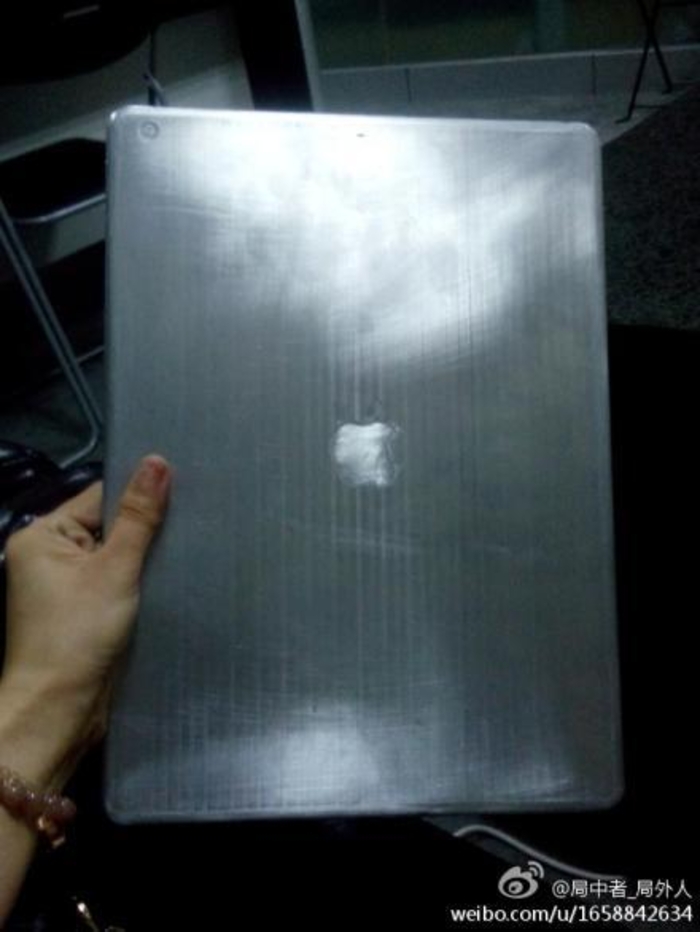 If any of the rumors are believed to be true, it seems most likely that the device will be closer to 13-inches than to 12. A leak by Weibo shows what looks to be like an iPad Pro, and its definitely closer to 12.9-inches than to 12 inches.  It will also be heavier than the iPad Air, and perhaps a bit thicker.

Concept designers at SET Solution apparently disagree, and in the video, they create the tablet that has an even narrower bezel with sharper edges, a camera with dual LED flash, Touch ID and textured aluminum backing.

Macotakara believes the dimensions will be around 305.31mm x 220.8mm x 7mm. That would make the iPad Pro even thinner than the iPhone 6 Plus, but thicker than the iPad Air 2, which 6.1mm thick.

If the iPad Pro does come, we will expect a better version of the new A8X processor, or perhaps even a new A9 chip. As to whether or not it’s actually coming though, we just have to sit back and see.