Join Potentially The World’s Largest And Most Addictive Quiz

Ever wondered what everyone around you is thinking? What they are feeling? Well now you have a way to find out! Cool new app ‘Now’ promises to let users gauge the mood of the world in real time, through an addictive questionnaire interface. Available from today for both iOS and Android devices, this app truly is a must-download.

‘Now’ is simple, but dangerously addictive.

‘Now’, as an app, is simple, but dangerously addictive. Users of Now are presented with a series of simple question prompts, displayed on a colourful background. These questions take the form of binary choices asking the user about their feelings, what they are doing, or what they have recently been up to, all with the end goal showing state of the world “right now”. Example questions include mundane things like “I am hungry/ I am full” to more personal “I had sex/ I did not” and even secretive confessions like “I am slacking off/ I am working hard”.

Once a user has answered a question one way or the other, they are then given feedback in the form of number bubbles which show how many people in the past few hours have responded to each side of the question. In this way, the app is able to show how many others feel the same way as you, and provide users with a little insight into how the rest of the world is feeling at any given moment. 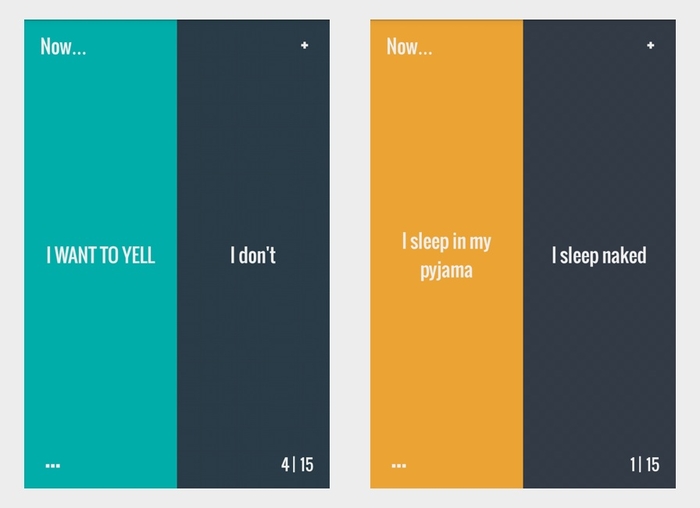 In addition to answering questions, a user of Now can also create their own questions, which are at first randomly uploaded into the list of questions which are answered by users. These users then also have the ability to ‘like’ your question if they feel it is particularly good. Should the question be ‘liked’ by a lot of people, it will be given a higher priority by the app, and thus answered by many more people. Furthermore, users are able to see how many of their Facebook friends have liked a particular question, providing them with further feedback on what’s hot, and what’s not.

Now is a great app for the socially curious

The easy-to-use interface of the app, combined with its lightning-fast responsiveness make it both fun to use, and quite addictive. Before long, we found ourselves compulsively checking our phones to see how users were responding to our questions, as well as returning to answer and vote of the questions of other uses. While little more than curiosity drives this, it is nonetheless incredibly interesting to see what other are up to, and fulling to know, that you are often not alone in your feelings.

Head to the iOS App Store or the Android Google Play Store, and download Now right away!