Mini Z: A Bad Idea If We Ever Saw One

Backscatter X-Rays have been a massive source of controversy since they first arrived in airports around the world. Using a specialised analysis of X-Ray reflections, this technology enables devices which can see through clothes, upholstery and other non-dense materials, allowing more efficient, but also more intrusive security searches.

But while airports were the first place you saw the backscatter X-Ray, you could soon start seeing it in many more places. This is thanks to the new “Mini Z” handheld backscatter X-Ray being marketed by AS&E. In the past, these X-Rays have been the size of large cupboards, restricting security agencies from deploying them on a mobile basis, but now, the Mini Z has taken this technology and reduced it to a game-changingly small size.

About the size of a bulky flashlight, the Mini Z’s mobility allows the potentially uses for this sort of X-Ray to expand exponentially. AS&E state that the device could be used for situations such as individual car searches, luggage searches on public transport and even inside the walls of houses. Potentially, these images could be used to find drugs, explosives, firearms and non-metallic weapons. 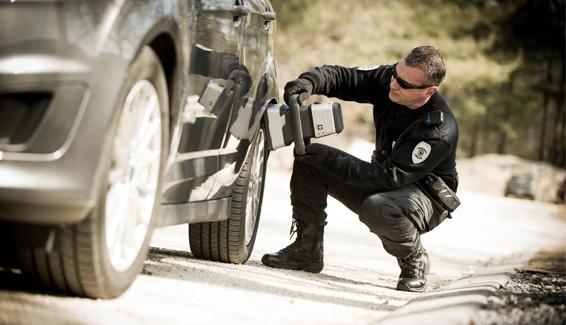 There is no doubt this is highly innovative technology, and that AS&E have made huge strides in miniaturizing the tech to this point, but the privacy implications of the device itself, as well as its potential legal ramifications are troubling to say the least.

The privacy implications of the device itself, as well as its potential legal ramifications are troubling to say the least.

Having a portable device which can see through walls and clothing, as well as inside luggage and within locked compartments, will need serious regulation in order to prevent misuse. From a privacy standpoint, there are concerns the technology could be used to surveil people to an even greater extent, making it almost impossible for them to hide anything, even under their clothes. Furthermore, the questions of whether the images of people rendered naked by the Mini Z will be stored permanently and who has access need to be adequately answered.

More concerning are the legal problems which this technology raises. Many jurisdictions have laws which prohibit police officers from certain kinds of searches without a warrant. Locations such as inside a home, or within locked car compartments are often subject to these kinds of legal protections. The Mini Z though, creates a legal grey area, where an officer could ‘search’ these compartments without taking actions which require a warrant (such as forcibly opening a lock).

Clearly, this technology has a lot of promise, however it all will require stringent regulation from the authorities in order for there to be greater public acceptance. That is of course conditional on them actually caring about what the public thinks…

Almost Every Major News Site In The World Was Just Hacked!