The all new flagship graphics card

Calling it the “most advanced CPU the world has ever seen”, Nvidia CEO Jen-Husn Huang announced their new GeFroce Titan X graphics card.

Announced last week during the 2015 Game Developers Conference, Nvidia unveiled their new GeFroce Titan X graphics card. Calling it the “most advanced CPU the world has ever seen”, Nvidia CEO Jen-Husn Huang took to the stage to announce it, but aside from announcing that is has 12GB of RAM and 8 billion transistors, the company was otherwise quiet as to what made this GPU so special.

But now, thanks to Videocardz.com, the benchmark specs of the Titan X have been leaked. Coming completely stacked with 3,072 CUDA cores that are clocked at zipping along at 1,002MHz, this chipset is lightning fast. 12GB of GDDR5 VRAM speeds along at 1,750MHz, and has a 385-bit memory that results in 336GB of bandwidth. As it doesn’t seem like it is a multi-GPU card, this makes this the successor to the old Titan, rather than the Titan Z, which is dual-chip. 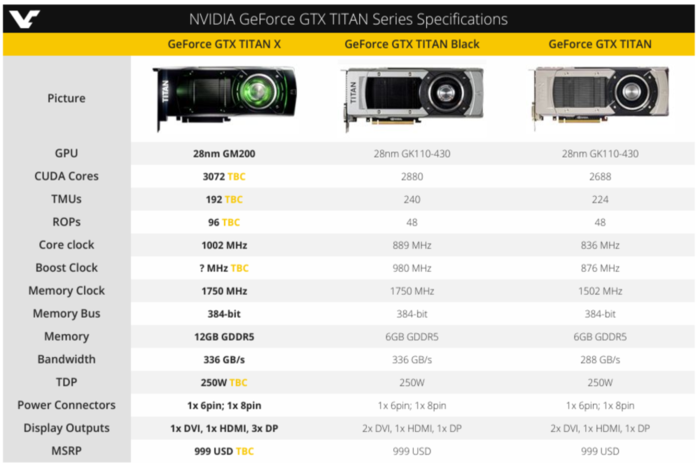 12GB of RAM is great for 3D work, and the site reports there will be three mini DisplayPorts, a single DisplayPort, and an HDMI port, with a 6-pin and 8-pin PCI-E power connectors.

The benchmarks indicate that the Titan X scored a 22,903 in 3DMark 11 using the Performance Setting, and 26,444 when overclocked. Although both scores are lower than AMD’s Radeon R9295X2, which scored a 28,930, we should give some credit where its due. AMD uses water-cooling to keep it stable and maintain high performance, where the Nvidia runs on fans, which is highly impressive. If AMD used fans, instead of water cooling, its likely the Titan X would be much faster. Either way, the Titan X is much faster than the Titan, which scored 13,814, and the TItan Black, which scored a 14,557. Hello, flagship.

It won’t come cheap. Videocardz.com is thinking that this will set you back $999. 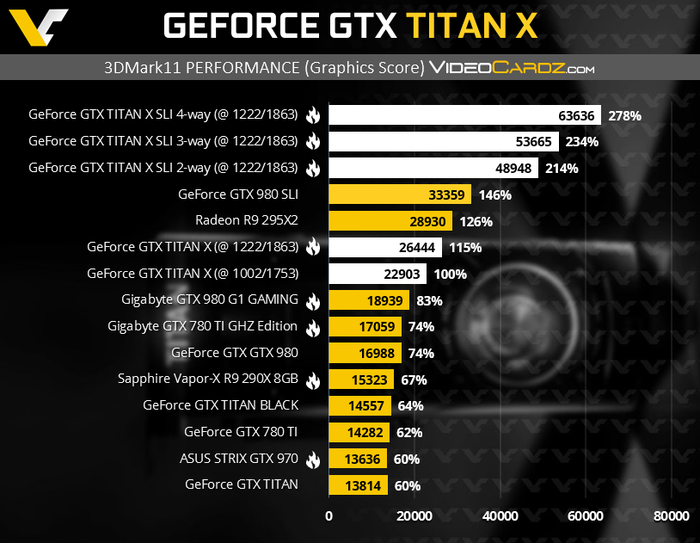