One Word Answer, Yo

This new app lets you say 'Yo' to your friends, and that's it.

If simplicity is a virtue, I can think of one new New York startup that have it in spades. These Confucian folks have designed a messaging app that literally lets you say one thing to your friends. And that word is ‘yo’.

The only response you can give is also just ‘yo’. Geddit?

It’s sort of like a poke, but better - less flirty, more friendly. You might send a Yo if you were wondering what time everyone was going out, or whether food was ready. Apparently there’s commercial interest too - your favourite blog could simply send you a Yo when their latest post has been uploaded.

While it might seem a bit cringe to the non-Americans out there, the word ‘yo’ is actually pervasive across many languages and cultures across Asia, India, Africa the US and Europe, and the date of its origin cannot even be established.

There’s speculation that It may have come into common parlance again in African American culture in the 60’s in the US due to Basic Training in the US military during the Vietnam War, or even WWII, when it was used a s slang for ‘present’ or ‘here’.

Basically, ‘Yo’ is a exclamatory sound that gets used a lot all over the world, which makes sense because it is simple, easy to say and easy to understand.

The YoApp works by first choosing a username, and adding friends by typing in their usernames. When you want to send them a message, you tap their name and it sends a "Yo". Once they tap your name, a Yo is sent back. 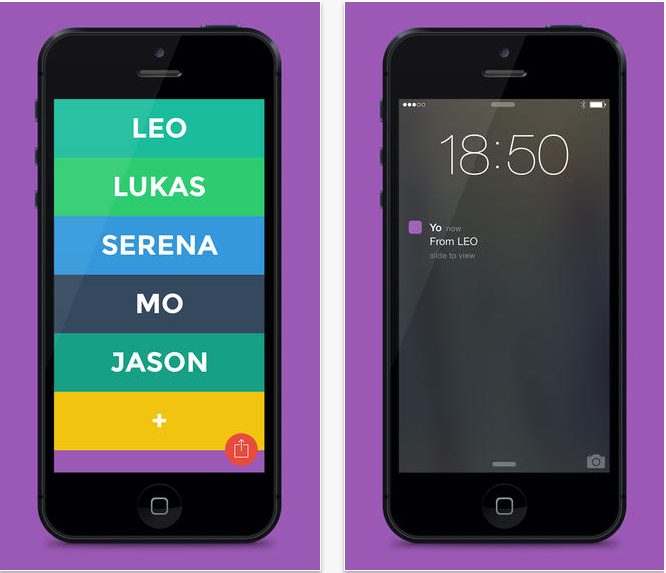 Once you get a Yo, it shows up at the top of your list of friends, and by swiping the phone, you can see the time it was sent. Another swipe lets you delete a message, or block people, if your friends are annoying you with their Yos.

The app went live on April fool’s Day without an official launch, as a bit of a joke it seems. Now it already boasts 50,000 active users, and $1million dollars in funding from investors, including angel investor and co-founder Moshe Hogeg, who is CEO of Mobli.

Watch this space, yo.