Play around with Google's Music Timeline

Ahoy music fans. Ever wanted to trace the career of Lee ‘Scratch’ Perry, Lou Reed, Madonna or Steely Dan? Google have developed a really fascinating way to explore the history of music through genres.

Through data they have accumulated from people who who use Google Play Music, Google have developed a fun, interactive graph which allows you to clearly understand the popularity of certain genres and bands through time. The colourful music timeline charts developments in music from from 1950 up until present day and in one glance you can see 64 years of musical history.

Click on Pink Floyd and you can see when were their albums released and to what acclaim at the time. Each band is accompanied by an interesting written in-depth analysis of their careers, building on the information you see in the graph. Naturally, you can buy the albums listed from Google Play - apart from classical music, unfortunately which has been omitted from the timeline because of the way it is classified - by date of composition rather than by recording. 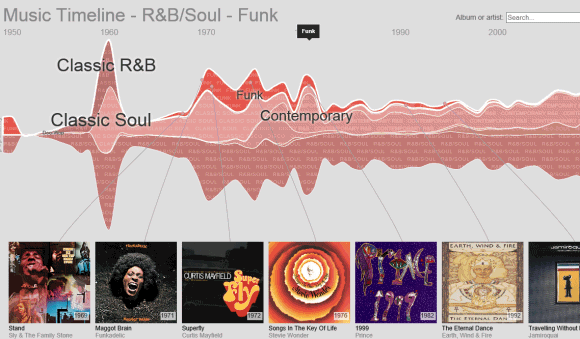