Home > News > The Crazy Plan To Land On A Comet

Sadly there is no Bruce Willis Involved

In the 1960s the US first sent robotic missions to land on the surface of the Moon and Mars, and in the 1970s the Soviets accomplished an even harder feat, landing a probe on the hellish surface of Venus. Since then however, while many new probes have been sent out, we are yet to land on an entirely new celestial body. Until now that is...

Over the course of the last 10 years, the European Space Agency (ESA) has been taking part in the longest game of catch up in history. After being launched in 2004, the ESA’s Rosetta probe has been gaining speed through orbits around the Earth and Mars in order to catch up with a comet speeding into the inner solar system. Last month it finally reached its target, entering a stable orbit around Comet 67P/Churyumov-Gerasimenko, where it has been taking photos with unprecedented detail.

Now, little more than an hour ago, the Rosetta probe has released a specialized craft which will attempt for the first time ever to land on a comet. The lander, called Philae, will slowly close the distance between Rosetta and the comet’s surface, with a landing time of around 16:00 GMT, if all goes to plan. There it will shoot high definition images, take soil samples and conduct experiments to determine the origin of life on Earth 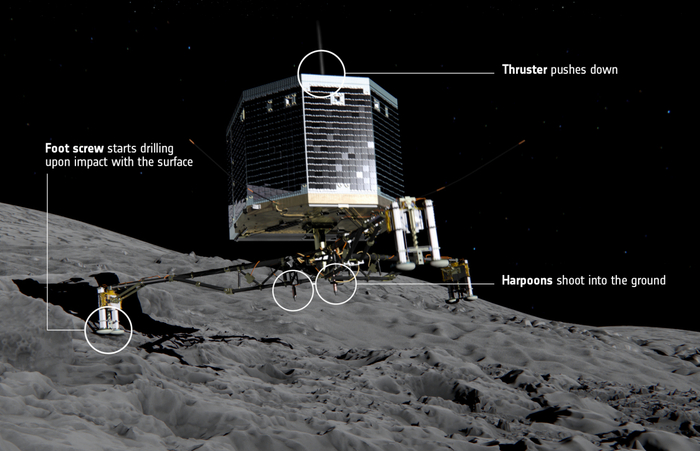 This being said, a safe landing is far from certain. While the Hollywood blockbuster Armageddon was an over-dramatisation, it does go some way to explaining the dangers of landing on a comet. Sharp and jagged rocks litter the landscape, and gaseous jets can erupt from within the comet at a moment’s notice. In addition, the low gravity of the comet, makes it very easy for the probe to simply just bounce-off its surface.

In order to remedy this, the Phillae lander is built with some unique landing mechanisms. Rather than having a parachute or retro-rocket like Mars or Moon landers, this craft will instead feature a series of harpoons. These will fire into the rock or ice on the surface of the comet, and hopefully allow it to pull itself in to the surface. Once there, its legs will screw themselves into the ground, fixing the lander in place.

UPDATE 16:20 GMT: The Phillae lander has sucessfully reached the surface of the comet and is now transmitting data.