The First Hybrid In 4K

Dell's XPS 12 is the latest 2-in-1 convertible PC that features a 12.5-inch screen with a 4K InfinityEdge display that certainly gives it an edge over the competition.

2015 has been a good year to the 2-in-1 industry. Also called convertibles or Ultrabets (Ultrabook and tablet hybrids), this year we’ve seen the best ever, including Google’s Pixel C, Apple’s iPad Pro, and Microsoft’s Surface Pro 4. Which is why it is no surprise that Dell is joining the trend; the XPS 12, is the latest 2-in-1 convertible PC that features a 12.5-inch screen with a 4K InfinityEdge display that certainly gives it an edge over the competition.

The XPS 12 can transform between tablet and laptop, but sadly, it's not that light, weighing in around 2.8 pounds. The new MacBook can boast a mere 2 pounds, which is slightly offensive when you realize Dell's hybrid is actually more expensive than Apple’s latest laptop (who knew that was even possible, to price things more expensively than Apple?)

It’s packing Intel’s brand new sixth-generation Core M processor that has been clocked at an astounding 2.7GHz. Additionally, it has Intel HD Graphics 515 on board, alongside 8GB of RAM and either 128GB hard drive or 256GB of SSD storage. 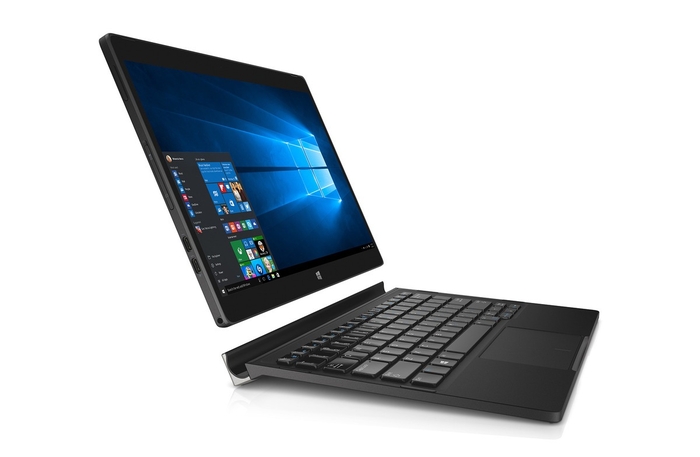 But the real dazzling aspect is the 4K display; with a screen resolution of 2,160 x 3,840, the incredibly thin bezels that the latest line from Dell is getting famous for take the 12.5-inch screen to its utmost potential.

As for the rest of the goodies, which of course cost extra, they’re available, too. The keyboard clips in via magnetic connection, and it supports the Dell Active Pen which supports your favorite apps and Microsoft Edge, Microsoft’s newest web browser debuting in Windows 10.

It has two Thunderbolt 3 ports, which is 8x faster than any USB 3. Obviously, it has USB Type-C and an SD card reader that is built-in to the keyboard dock, which is pretty nifty, if you ask me.

The XPS hits shelves this November, and if you want the 4K model with the SSD, you’re looking at $1,299.