Home > News > The Glove That Can Make You Play Like Mozart

The Glove That Can Make You Play Like Mozart 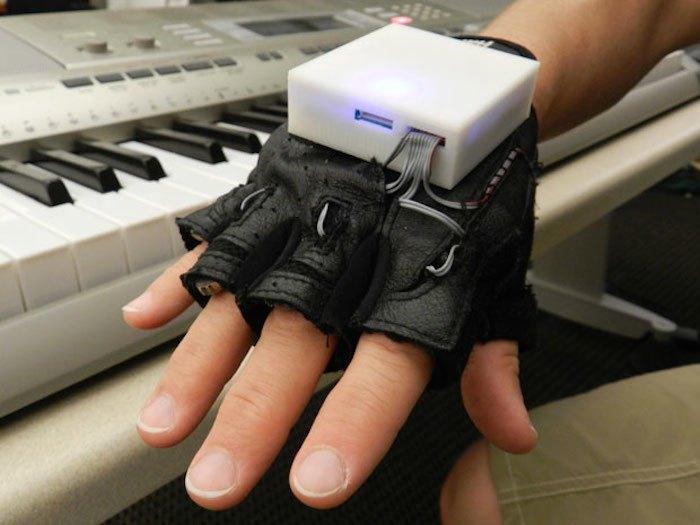 About all I can remember from my short-lived piano playing days is the two fingered chopsticks approach. I, like a legion of others, gave up and now am sorry for it. It took too much practice, and too much time, and my eleven year old self was too committed to usurping the Minoans in Age of Empires. Not that that has actually come to any use, unfortunately.

But maybe it’s never too late, as they say. Sure, I don’t have as much down-time as when I was a kid, but I’ve heard tell of an invention that could somehow teach anyone the piano without the endless practice required to learn a song. It’s called the Mobile Music Touch (MMT) and has been developed by Georgia Tech professor Thad Starner. Starner has pretty much invented a magic glove that can teach you the finger movements required for just say, Beethoven’s Moonlight Sonata, without putting a finger on a key.

The wireless glove works by using haptic learning so that there are sensors that trigger muscle response. This means that the wearers can to learn to play piano melodies while carrying out everyday tasks, such as walking the dog, surfing the internet, or watching a movie. You don’t need to pay attention to the glove for your brain to memorise the movements, it sort of looks after itself. A bit like Karen in Hans Christian Andersen’s Tale, The Red Shoes, whose feet are completely taken over by red shoes that make her dance night and day.

A bit like Karen in Hans Christian Andersen’s Tale, The Red Shoes, whose feet are completely taken over by red shoes that make her dance night and day

The MMT device, designed by Starner, (who you should know, is one of the current technical leads on Google Glass. He’s really committed to the idea of wearable tech, having built his first wearable computer in 1993) looks like a fingerless workout glove with a small box on the back for a Bluetooth radio and microcontroller. At the base of each finger and the thumb, vibration motors are embedded in the glove, so with every note, the glove taps the finger corresponding to the appropriate key on a piano keyboard. You can load the song into your mobile phone and it is played as you go about your business. This means that in as little as 30 minutes, your hands can learn the "muscle memory" of the first phrases of the song, even if you have been on Skype to your mother.

I’m sure this invention will have its many detractors, particularly from musicians bemoaning the loss of the hard-won discipline required to learn such instruments. However, the device may have further uses. A separate research team has been using the MMT to see whether it made improvements to people with spinal cord injuries. Participants who used the glove showed significant improvements on tests of hand sensation and dexterity compared to the people who did not use the glove. One participant said that since using the glove he could "open doors better, and it’s easier to turn the key to start my car and use a letter opener now."

While this work is still in its early stages, the experiment suggests that rehabilitation may be possible with wearable devices, which is a very exciting prospect.