Home > News > The KKK Just Got Hilariously Hijacked By Anonymous

The KKK Just Got Hilariously Hijacked By Anonymous

It’s doubtful they will get much sympathy

If there is one piece of advice that we could give to groups online, it would probably be to avoid provoking Anonymous. While the collective is far from cohesive, and often is working on seemingly pointless projects, when angered, it can cause people’s digital lives (and their personal lives) to turn into a living hell. This is a lesson which the KKK has learnt well this week…

So what went down?

Following the death of Mike Brown at the hands of a white police officer earlier this year and the proceeding riots, the community of Ferguson, Missouri has been on edge. Further unrest is possible following the outcome of a Grand Jury which is looking into the incident. This is where the KKK comes in. Allegedly, the group threatened to use “lethal force” against protests, presumably as part of the group’s continuing prejudiced agenda.

Taking offense to this threat, Anonymous then launched an online campaign against the KKK in the area. Named #OpKKK, this operation called on members of the collective to engage in DDoS, ‘doxxing’ and other forms of attacks against the organization, which the Southern Poverty Law Center classes as a “hate-group”. The KKK however, was unafraid, with one of their official Twitter accounts claiming that they were “reading the Anonymous threats with amusement”, accompanied with the hashtag “#cowards”. 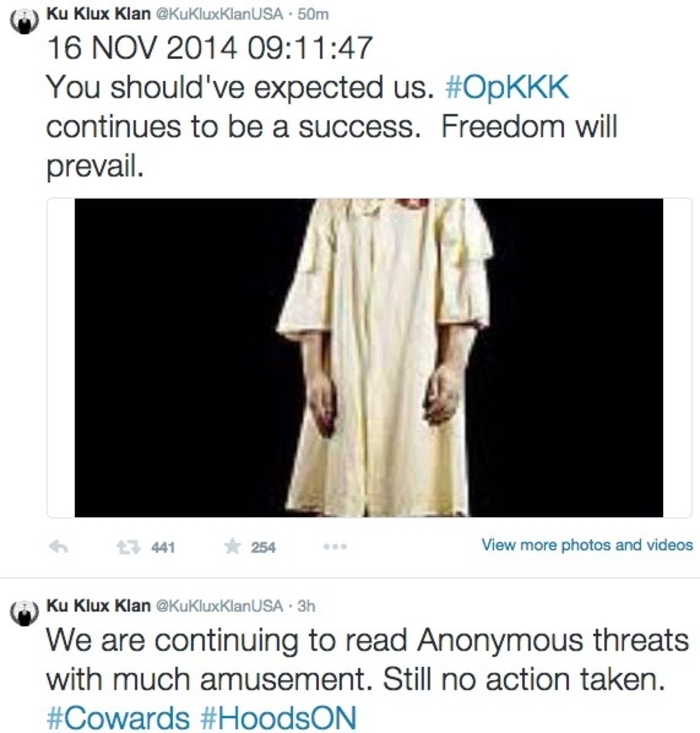 Little more than two hours later, this Twitter account, as well as several others had been hacked by Anonymous, and began to post anti-KKK messages. As well as this, Facebook pages associated with the group, were taken over, and several KKK websites shut down.

Additionally, Anonymous allegedly hacked the emails of several members of the KKK and began ‘doxxing’ its members. This process involves the positing personally identifiable information, images and email address of people, in order to provoke action against them, and to hurt their standing in the community.

While other actions by Anonymous have been controversial due to the the impact that they have on their targets, as well as the dubious legality of their actions, it is unlikely many tears will be shed for the KKK. The organization is synonymous with racial prejudice, and has been widely discredited, even in its powerbase in the Southern US. As such, #OpKKK was likely a PR win for Anonymous.