Home > News > This Might Very Well Be The Best Tablet Ever Made!

This Might Very Well Be The Best Tablet Ever Made!

It’s been a long wait, but now Apple has finally revealed its latest version of the iPad. The new iPad Air 2 is Apple’s latest edition of what has grown to become the most successful tablet device in the world. Despite the fact that its predecessor was so universally well-reviewed, it is seeming like Apple once again has outdone itself, and produced what is perhaps the best tablet in the world.

On a first look, the design changes on the new tablet are both subtle and also reflective of the design language of the iPhone 6 and iWatch. The most important change is the reduction in thickness. The iPad Air 2 is a mere 6.1mm thick, a significant reduction from the 7.5mm of the previous model. The bezels are subtly redesigned; the edges gentle curve away, avoiding the more angular form of previous additions. In addition, the device continues the trend of Apple’s high-end metallic construction, with the back panel consisting of a single piece of glossy metal.

Of course, form is only a small part of the picture...

The Apple iPad Air 2, also features upgraded hardware, positioning it on par or ahead of most of its rivals (with perhaps the exception of the Surface Pro 3). The device runs Apple’s new 64 bit A8X chip backed with the M8 motion coprocessor. The display continues the company’s commitment to high-resolution retina displays, maintaining the screen resolution of the previous model, but reducing the reflectivity and depth of the display by integrating it directly into the screen glass. In addition, Apple has claimed that its new battery technology will deliver ten hours of battery life, a 40% increase on the previous model.

As well, the tablet utilizes a similar 8MP iSight rear facing camera to the new iPhone 6, complemented by a redesigned FaceTime front-facing cam for video calling, with new features such as facial recognition and burst mode. Another feature taken from the iPhone 6 is the Touch ID fingerprint scanner, which allows both for easy unlocking of the device, as well as additional security which the tablet is utilizes for Apple Pay. 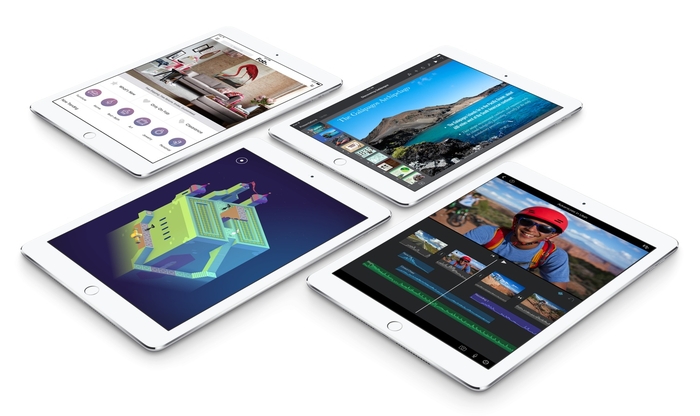 Once again Apple has proved that it is a force to be reckoned with in the consumer electronics world. This new iPad, combined with the hugely successful iPhone 6, will position Apple for a very strong 2015, regardless of the success of the Apple Watch.

Stay tuned for more information on this, and the other new Apple devices released in the coming hours and days!