Home > News > Why The Surface Pro 4 Beats The iPad Pro

It's pretty freaking obvious, too

In fact, even though Apple was dominating the tablet sales, Microsoft realized that there was a huge market for professional tablets, and so the Surface Pro was born.

Before there was Apple’s iPad Pro and Google’s Pixel C, there was the original tablet-laptop hybrid. It seems like so long ago now, but actually, it was only last month.

The thing about the whole 2-in-1 device is that a lot of people didn’t get the use. Everyone basically thought “picking one” would suffice.

But Microsoft was a believer early on. In fact, even though Apple was dominating the tablet sales, Microsoft realized that there was a huge market for professional tablets, and so the Surface Pro was born.

There is a lot of specs that we can debate, but frankly, the whole “professional tablet” idea wasn’t an actual movement until Tim Cook got up on that stage and danced his Apple dance. And now the entire world wants a professional tablet because Apple says that it is the cool new thing.

But here is the thing: nobody is going to pay professional-level prices for a device just because it is “cool.” I mean, don’t misunderstand me, that’s basically the entire foundation of the Apple trend; however, why pay for the iPad Pro when the perfectly acceptable iPad Air is also available? The answer is simple - Apple lovers will always buy Apple, but that doesn’t mean they’re going to buy the iPad Pro.

So who would buy the iPad Pro? Even simpler: professionals. Basically, the iPad Pro and the Surface Pro 4 are really only for industry people. 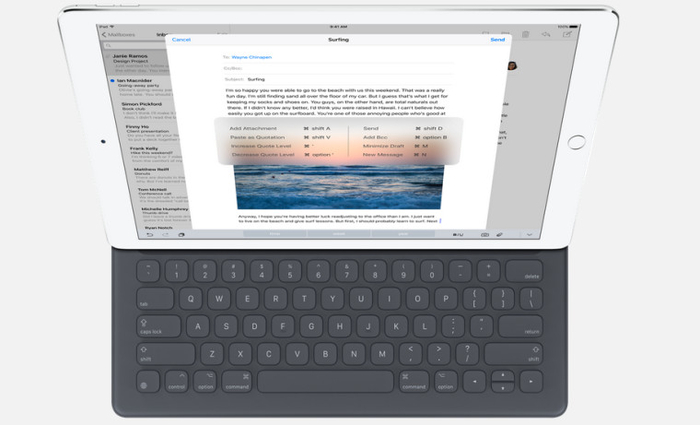 The reason to buy Microsoft should be pretty apparent: the Surface Pro 4 is powered by an entire desktop OS, Windows 10.

This is the truth, specs wise, there really isn’t a discernable difference at this point. Sure, the Surface Pro 4 is a little bit heavier (766-786g) compared to the iPad Pro (713g). It also is a little bit smaller (12.3-inches on the Pro 4 versus 12.9 inches on the iPad Pro). Admittedly, the Surface Pro still manages to have more pixel density (267ppi instead of Apple’s 264ppi). Microsoft also beat Apple at the camera game; although both have 8 megapixels on the back, Microsoft managed 5 megapixels for selfie-snapping, and Apple only brought a pathetic 1.2 megapixels to the table.

The main difference, performance, can’t really be confirmed just yet because neither device has been released to the public yet. So even though Microsoft runs an ARM SoC, and Apple runs a full x64 chipset, we can’t really compare. Apple is claiming to the world that the new A9X chip is more powerful than “90% of most PCs on the market”, but frankly I think it would be a grave error to sell Intel’s brand new 6th generation processor, SkyLake, short. According to Microsoft, the new processor is 50% faster than Apple’s iPad Air 2.

The Pro 4 was literally built to be a 2-in-1, whereas the Pro is really just a tablet, which makes it far more capable than any iOS device.

But until benchmarks are released, no one can claim anything. So in the meantime, the reason to buy Microsoft should be pretty apparent: The Surface Pro 4 is powered by an entire desktop OS, Windows 10. And we should be very clear about something; the Windows 10 of 2015 is absolutely nothing like the Windows we have seen before. The Pro 4 was literally built to be a 2-in-1, whereas the Pro is really just a tablet, which makes it far more capable than any iOS device.

Sure, developers love to make apps for Apple, and the app ecosystem is incredibly healthy. However, again, these “Pro” devices are made for professionals and enterprise users. Which means Microsoft absolutely, hands-down, dominants this market. Obviously, all Windows legacy is available on Windows 10, and therefore, on the Surface Pro 4.

Meanwhile, while there are tons of iOS apps, none of them have the productivity capabilities a fully functioning Windows machine.

Obviously though, if that doesn’t sell the point, this will: for the 128GB model, Apple charges $949, and Microsoft's model is being sold for $899. The winner is clear.