Home > News > Yes, Facebook Is About To Get Worse

You didn’t ask for this, but you are getting it anyway…

There once was a time when Facebook was a useful way of communication with your freinds and actual networking socially. Unfortunately, that time has come and gone. Now, due to numerous site re-designs, over-commercialisation and a selective News Feed algorithm, the site has become a shell of what it once was. Upon logging into the site, you are greeted with a barrage of narcissistic image posts, links to clickbait sites, and precious little interesting content.

For this reason, it’s no wonder that users (especially younger ones) are rapidly reducing the amount of time which they spend on the site per week. But if you thought the social network couldn’t get worse, you were wrong…

In its latest addition to the Facebook site, the company has clearly decided that the comments section of each post was allowing too much interesting dialogue. To fix this, it has decided add in animated emoji (so-called ‘stickers’) to the comments threads. Yes, you heard right. Stickers. 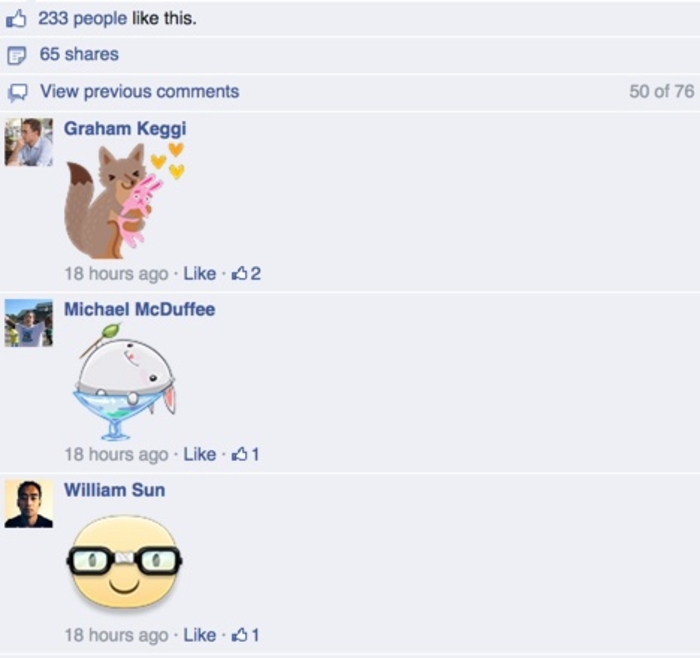 After trialing this functionality on their Facebook Messenger app, the company is now bringing it to the web as well. Indeed, if past experiments with stickers are anything to go off it will almost certainly bring down the level of conversation within these threads. Chinese social network WeChat, which ‘pioneered’ the use of stickers, is now simply a boring and overly simplified feed of dancing cats and animated gifs.

So why then has Facebook decided to do the same? Money of course. Allowing the use of stickers on Facebook creates an arbitrary market for - you guessed it - stickers. By selling new and ever more ludicrous stickers to its sheeplike-users, Facebook can generate additional profits. In addition, it can bring in supplementary income through movie and TV tie-in stickers, or other marketing-based products.